After a long journey, we arrived at Ghyll Head. Our first task was to climb a steep hill to the huge house. Once we arrived everybody was noisy with excitement. Once we had eaten our packed lunches Mr Usher told us our bedroom groups. Once we knew our room we had to go and make our own beds which a lot of people struggled with. After that we was shown where the store room was and collected all our equipment that we would need for the week. We found out we was in Mr Beresford's group and we were straight onto the mini bus to Gummers How. We hiked up and up the steep, Rocky Mountain. We were all slipping but that didn't stop us enjoying the climb, if anything it just made it funnier. We finally arrived at the trig point which Anne told us it was 1000ft above sea level! We got a chance to have a quick rest and take some pictures on our cameras. The view was great although it was quite misty up there. After a quick stop we had a challenge of getting down the hill safely before dark. We trekked the half mile  back down the hill and through the wild cows.
After a quick drive back to the house we cleared our stuff away and sat down for a delicious meal. Pizza, chips and beans with chocolate cake for desert. Mmmmm. After dinner, we went out in the dark with our helmets to do the night line. We had to go into to the forest and make our way through the misty, creepy and almost pitch Black Forest with no light but a piece of rope to guide us. After 15 minutes of terror we reached the end where Mr Beresford, Mrs Wilson and Mrs Freeley was hiding to scare us. They didn't scare our group but did scare most of them. When we finish we even got to hide with them and scare the last groups. Although everybody was scared they absolutely loved it and was laughing, screaming and shouting throughout the whole thing.
We have just got changed into our pyjamas and are having some free time with our friends playing pool and other games. Mr Usher will soon be making us hot chocolate and then we will be going bed for some much needed rest before a fun packed day tomorrow with our group. The first day has been amazing and can't wait for even more fun. 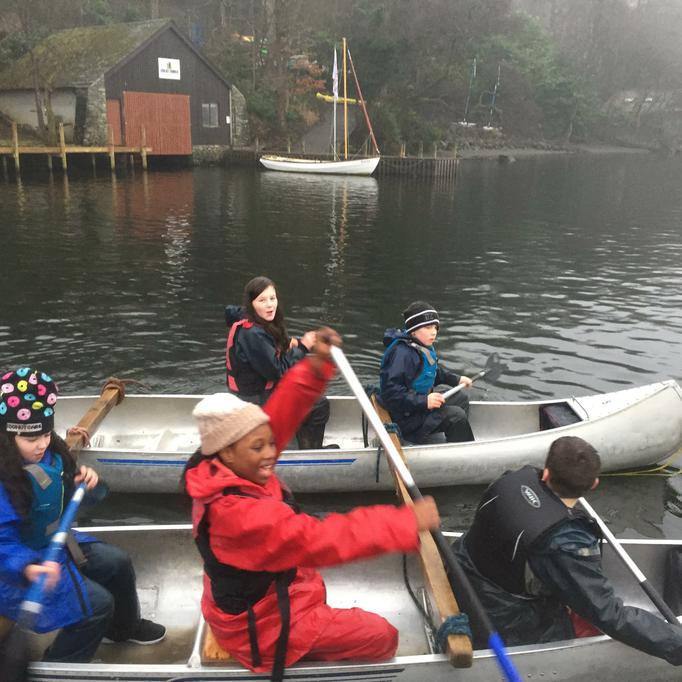 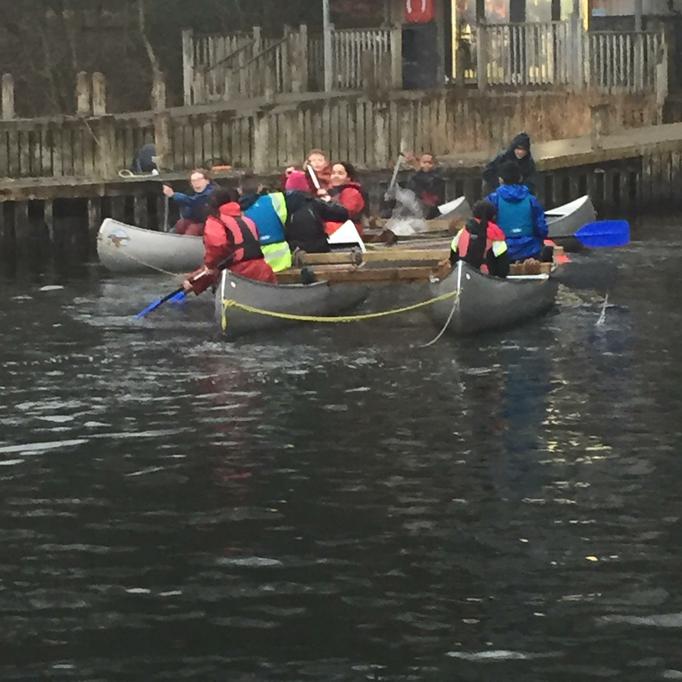 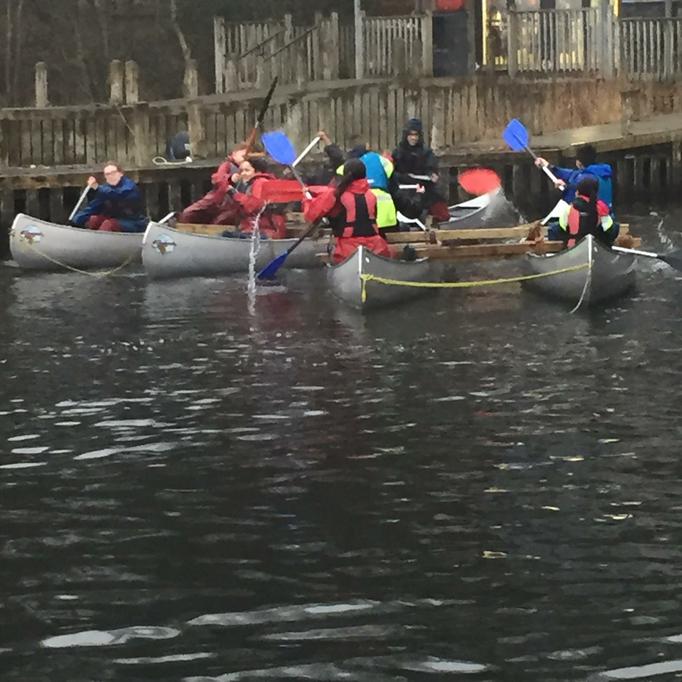 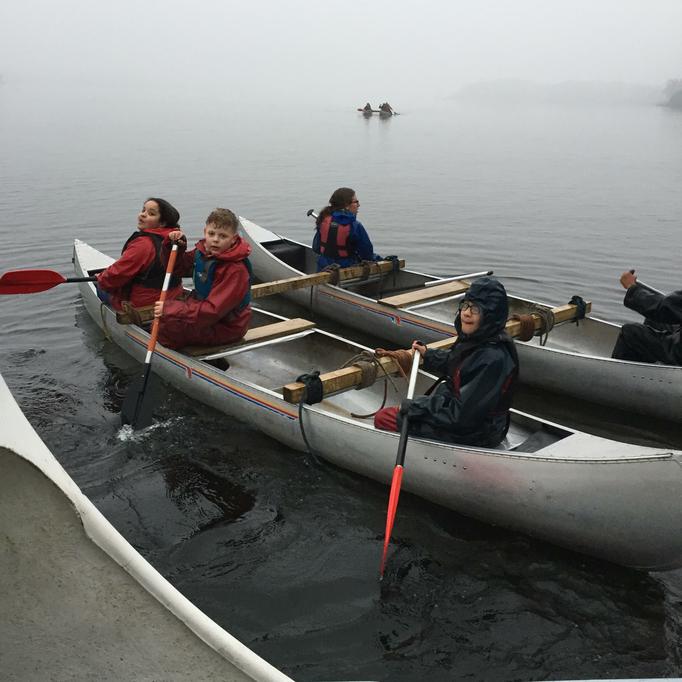 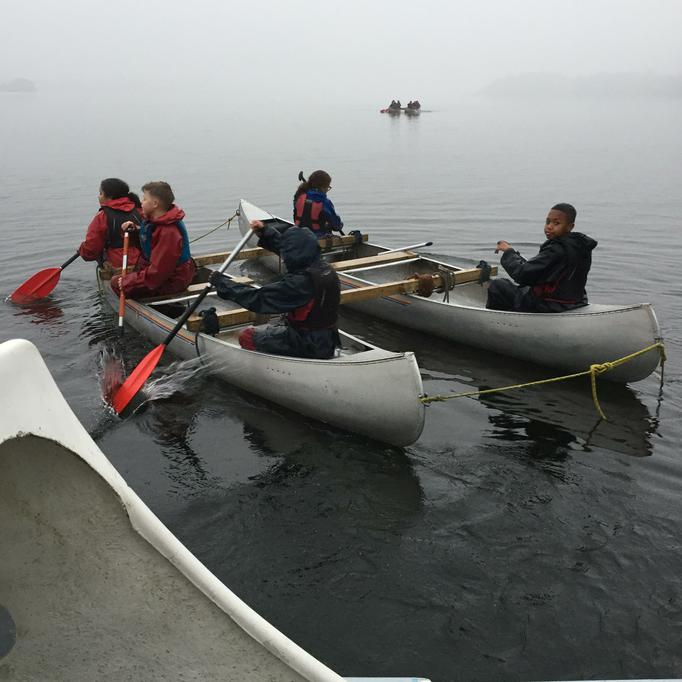 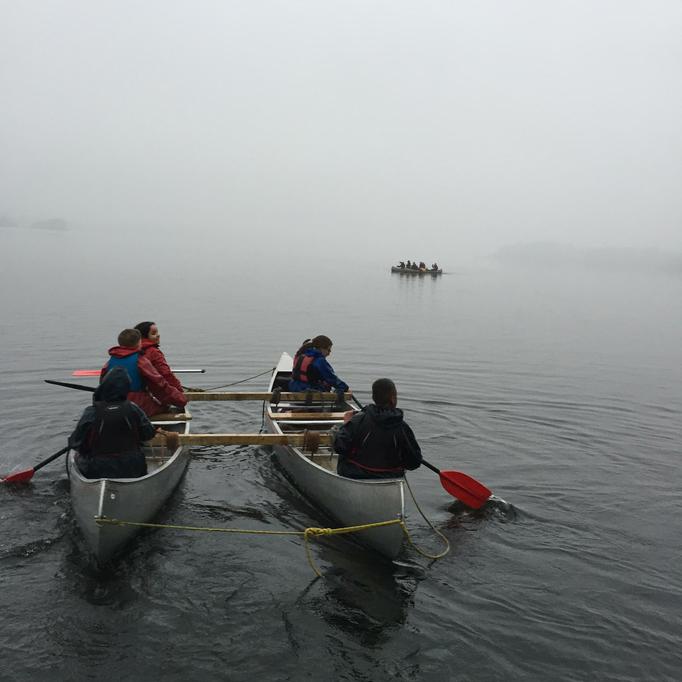 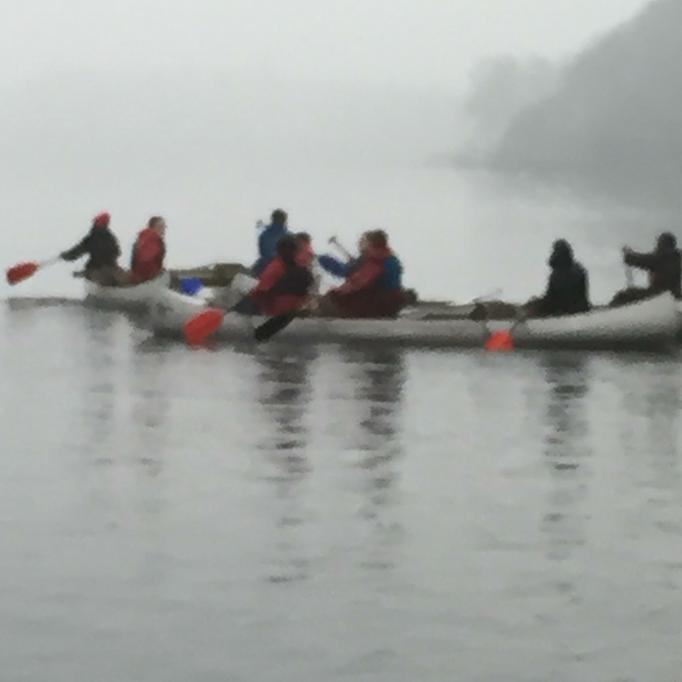 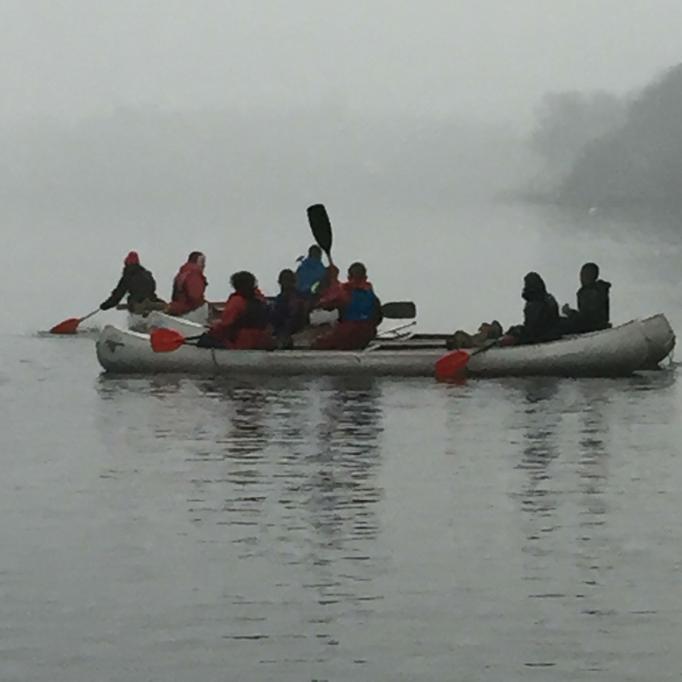 Today we had the best experience ever. It was a great opportunity to explore our uncomfortable zones and over come them. Our first activity of the day was going on the zip wire. It was extremely high and very frightening. The very first time we reached to the top of the tower you could feel the chills crawl down your spine. We all had to use our growth mindset and our learning powers. For an example we would have shown co-operation and we would have worked as a team and to show our resilience through our task. But then it got to the point when we worked as a team and we had to face our fear but we all made progress and we always behaved safe and sensible. There was one point were we always made mistakes but we tried and tried again until we have completed our task.

The second task of the day was the Ghyll Head assault course. The rules of the task were that we couldn't touch the ground and there was only allowed to be three people on per stage. In the assault course the challenges were mostly balancing. Everyone gave the course a go but hardly anyone completed it without falling! We all stayed resilient to try again and again when we fell off.
Rock climbing was the next activity. The top of the wall was as high as the zip wire which meant everyone was a bit nervous to start climbing. As people got higher, the climbing pegs got smaller. Some people managed to get all they way to the top.

The afternoon brought us new challenges. We walked down to the lake to do some canoeing. Once we got there we were all supplied with life jackets before building our own rafts to take onto the lake. Once we had finished the building we took our places in the raft and paddled across to an island on the opposite side. At first it was a challenge but once we started co-operating it became easier and got there fairly quickly. Once we arrived on the opposite side it was time for some fun and games. We all had to go and hide whilst the instructors counted. Even Mr Beresford and Mr Usher wanted to join in so they did. Once hidden the instructors would count down loudly from 10 and in that time we had to get closer to them whilst staying hidden once they finished counting. The aim was to get back to base without being seen. It was an amazing game and everybody loved it.

After that we all got back in our rafts and raced back to the other side. It looked like a straight race for the win between Mr Beresford's boat and Mr Ushers boat. The shot off like a pair of Ferraris. However about 3 quarters of the way across both the rafts became tangled as Mr Usher and Mr Beresford would grab the other raft to try and push them backwards. They got tangled and then a huge water fight broke out between the 2 rafts. It was hilarious Mr Usher got soaked and he soaked Erin and me (Amy). This allowed another raft to casually stroll passed. Once we dropped The teachers off we were given some time on the rafts with no adults which was fun and most of us had more water fights in the lake. It was cold but also too fun to even notice.

After a fun packed day, we had sausage, mash and gravy with a donut for desert. Then Mr Usher told us an alien ship had landed. We had to go out in our teams and locate the aliens in the dark with nothing but torches. It was dark and a bit creepy but again everybody loved it. We had to find them and get their name and cereal number and take it back to our teacher leader at the front of the house. We weren't allowed to touch the aliens as Mr usher said it would turn our tongues brown and yellow and make our ears huge. We are still awaiting to find the winner.

We are now waiting for Mrs Freeley's  hot chocolate. She has promised hers will be the best.

We are loving it here! 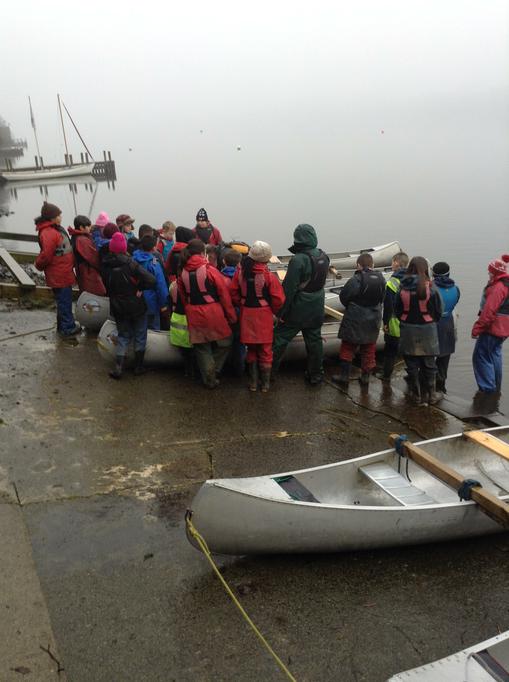 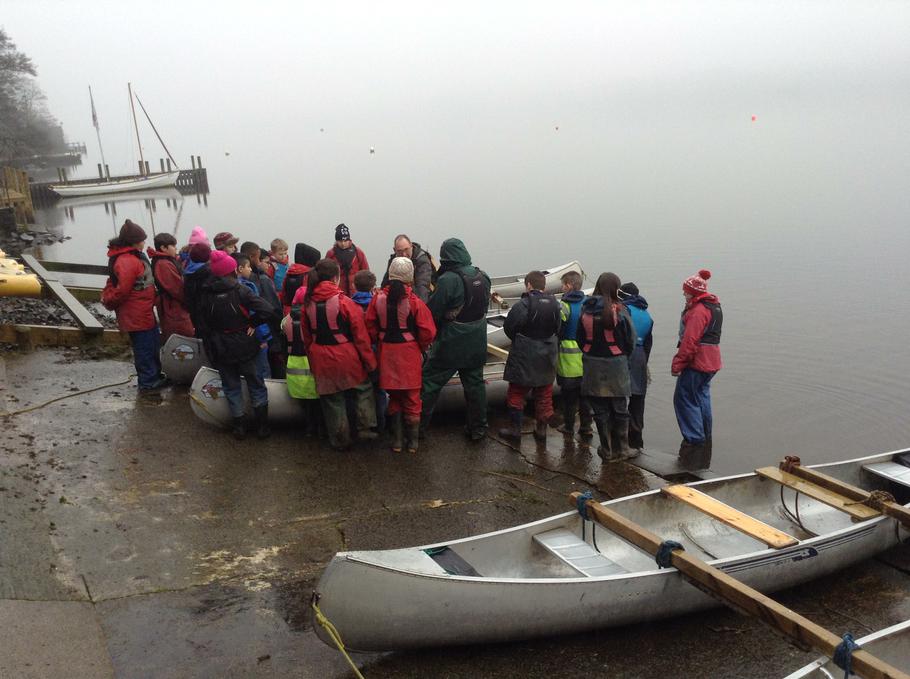 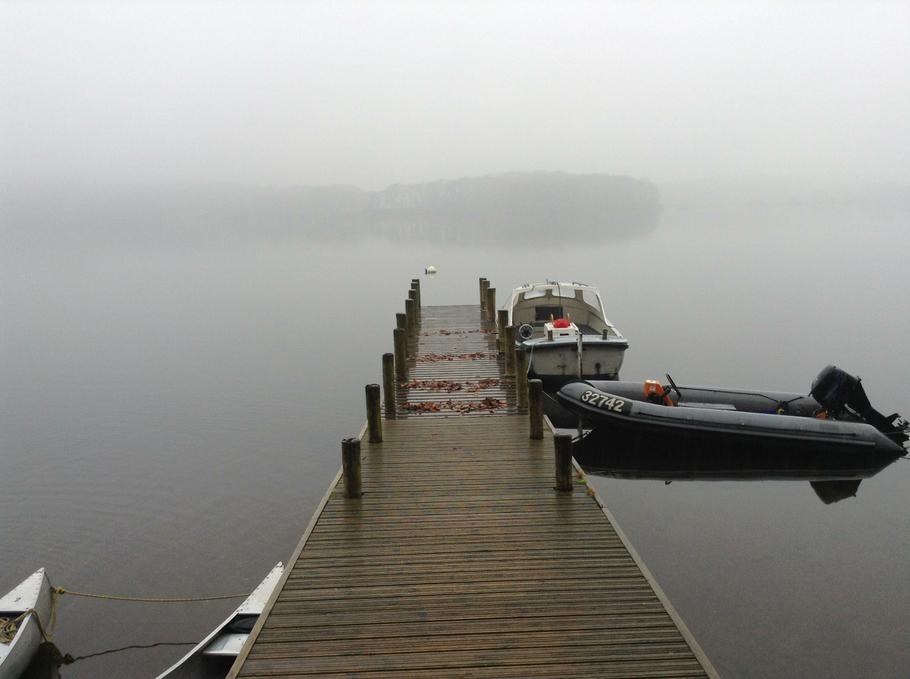 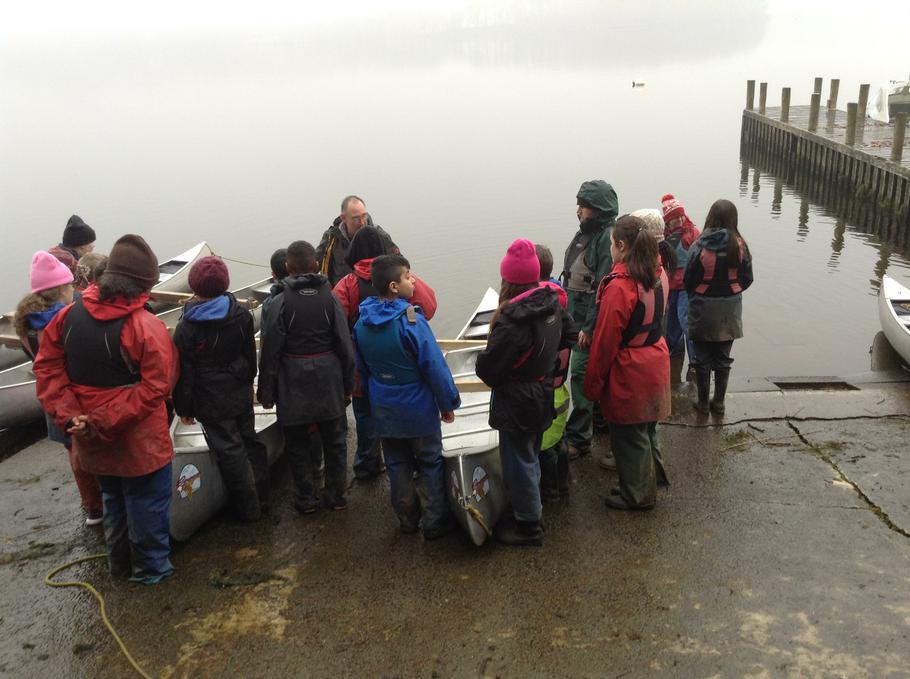 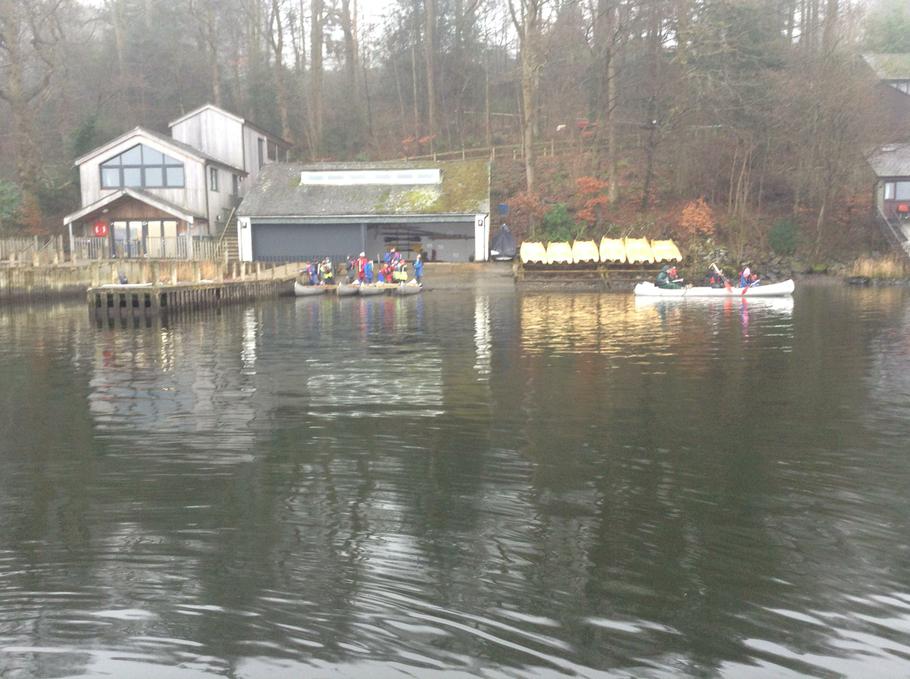 This morning we were told we were going caving! They said we had to go underground and had to crawl in small spaces, which made me feel terrified. This wasn't exactly my hobby but I love experiencing new things. After an hours drive to Yorkshire, we finally arrived. A shiver ran down my spine as we approached the first cave. This would turn out to be the longest cave we squeezed through. We had to duck, squeeze and crawl through the cold and wet cave. We also got to challenge ourselves by squeezing through tiny tunnels in the cave. I managed to complete all the challenges even though they were tough. After around 10 minutes my condense had grown and was able to navigate my way through the caves without worry or help.

Although it was cold, wet and at times muddy I loved the caving (I was so tired by the end).

After we left the first cave, we walked 5 minutes to cave number 2 which was even wetter than the first. We kept walking through the cave and as we walked we kept getting wet and muddy but we carried on. We got a challenge half way through and I felt a bit nervous for the first challenge in cave 2. The challenge was crawling through a small tunnel and go down a slide. Mr Beresford gave it a go and made it to the slide and fell down head first into the water after that we carried on doing challenges. The caving was really good,I loved it.

Finally we were given the choice of 2 caves. Either the wet knickers cave or back to cave 1 and do it without Mr Beresford and Holly (the instructor). We chose the wet knickers cave. We had to really had to bend down I nearly got stuck. We had to crawl through the water and we got soaked and our wellies filled with water. I'm excited about the talent show that we going to do tonight. We are having such a great time!

On Wednesday night, we had the famous Ghyll head got talent, where Ant, Dec and Sherbet Derbert opened it. We had 13 acts and they were all very good. We had four judges called Simon Cowell (Mr Usher) A-MAN-DUH (Mr Beresford) Alesha (Mrs Wilson) and David Walliams (Mr Kelly). After the show, the judges chose who would win the ghylls heads got talent but we have to wait for the scores which we will  be receive on the Friday that we come back. Everyone's waiting to see who wins and are really excited!

This morning , our group started to do archery and we found it challenging to hit the target but we got there in the end. After we played archery, we collected wood to make the fire in the Tepee at night. Then we went back to the kit room to get some extra socks, fleeces and gloves so that we could do a walk. We had clues to tell us where to go because we decided to do it the walk on our own but Mr Beresford, Mel and Holly kept sneakily following us. They did that because we got lost but it was a great
trip up the mountain!

Later on , we went onto the mini bus to go gyhll scrambling. We got into our group number order and went scrambling up a mountain ,where there was a waterfall. We went up and passed the stream and some people got wet trying to cross the waterfall. Then holly gave us a challenge to cross the stream without using our hands. When we reached the top we saw a dead sheep, it was disgusting! At night time we would go to the tepee to roast marshmallows and drink hot chocolate. After the scrambling, we really enjoyed it and can't wait  to eat roasted marshmallows. 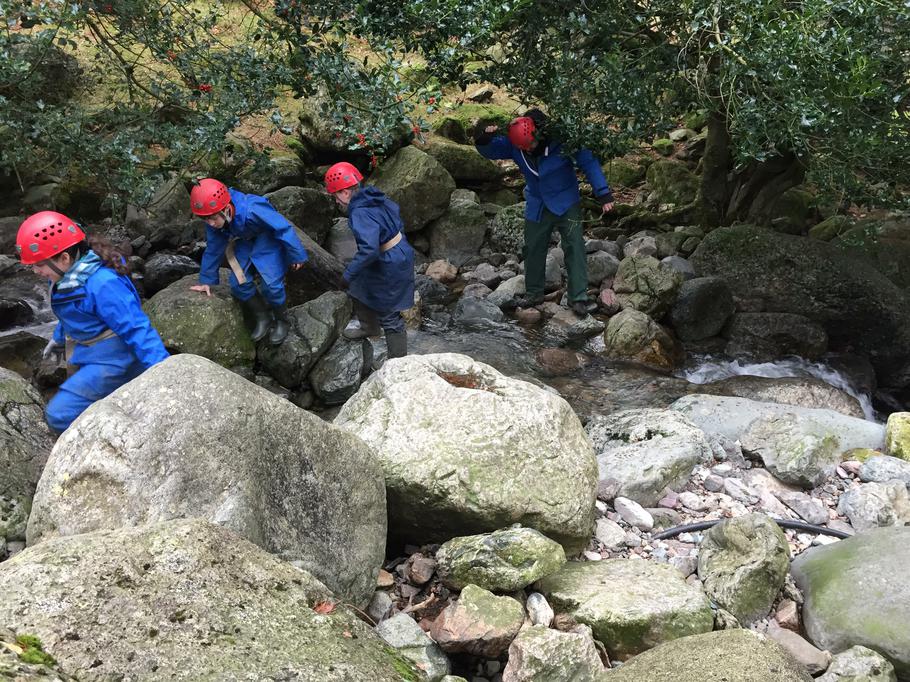 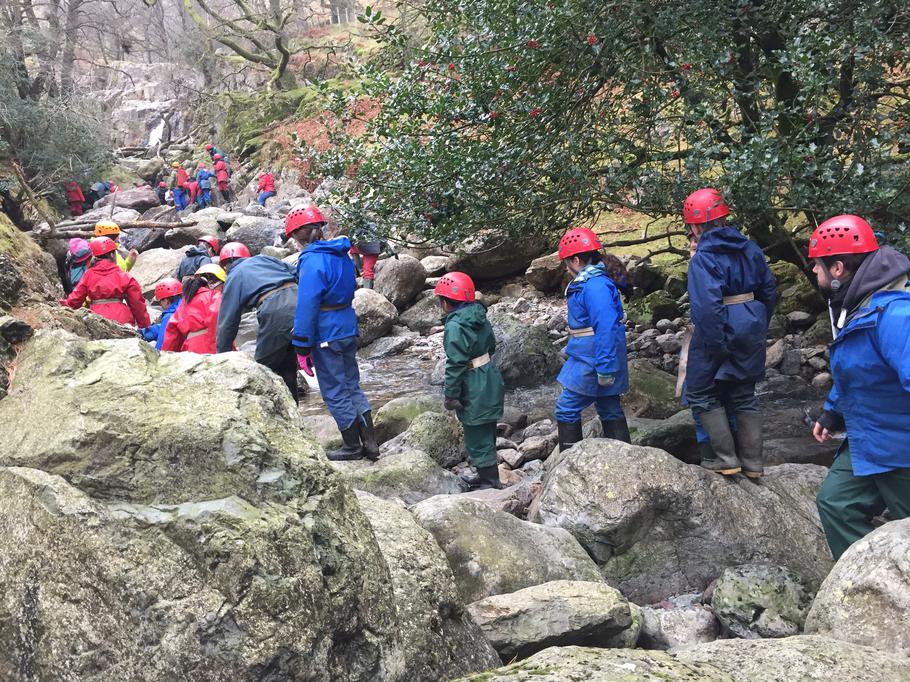 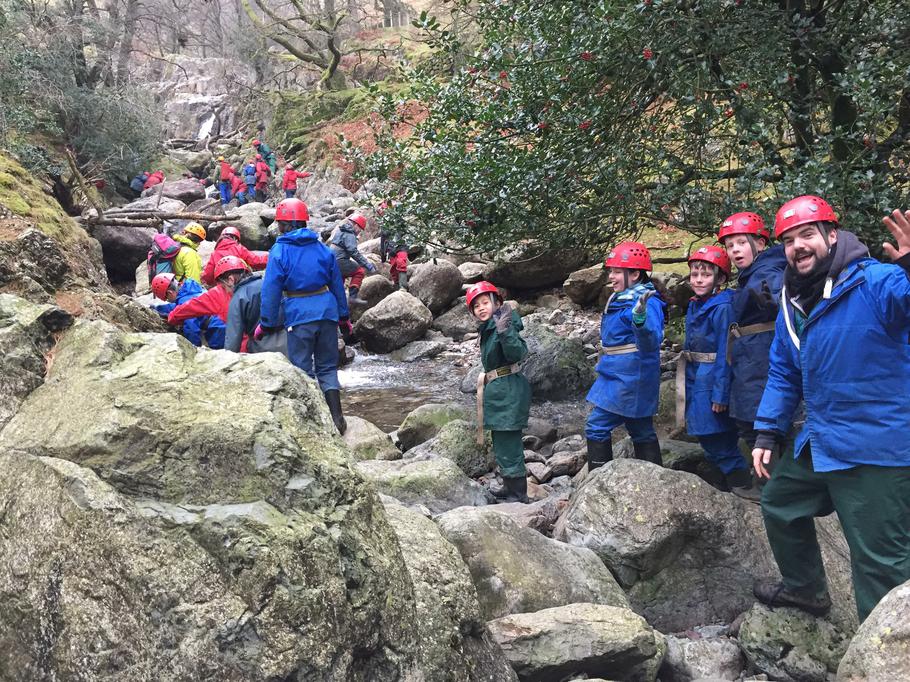 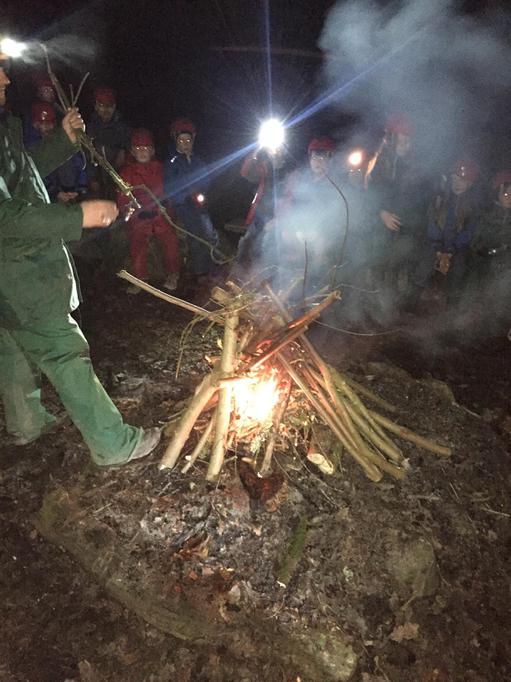 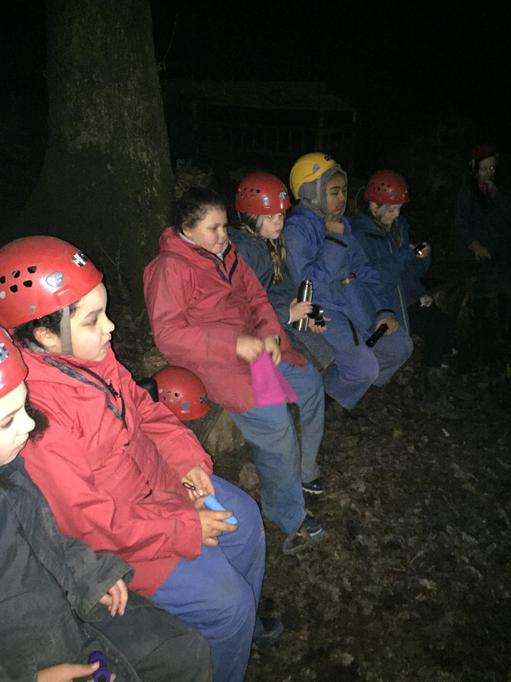 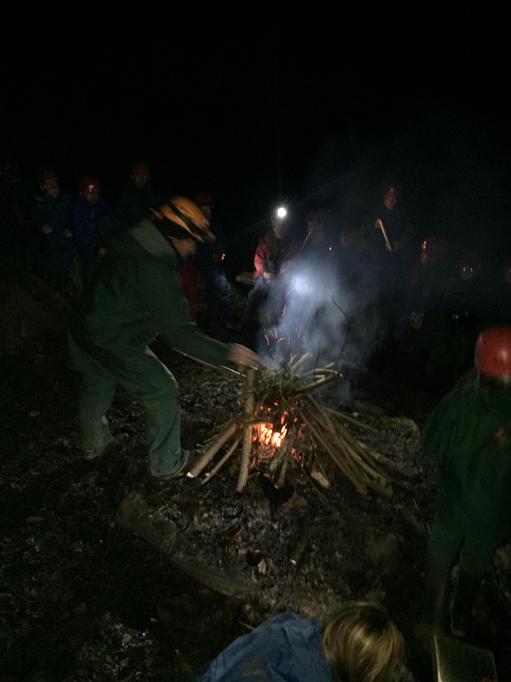 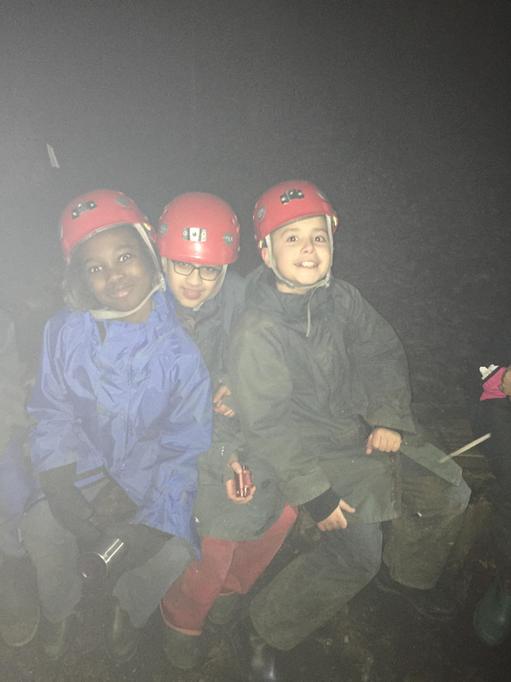 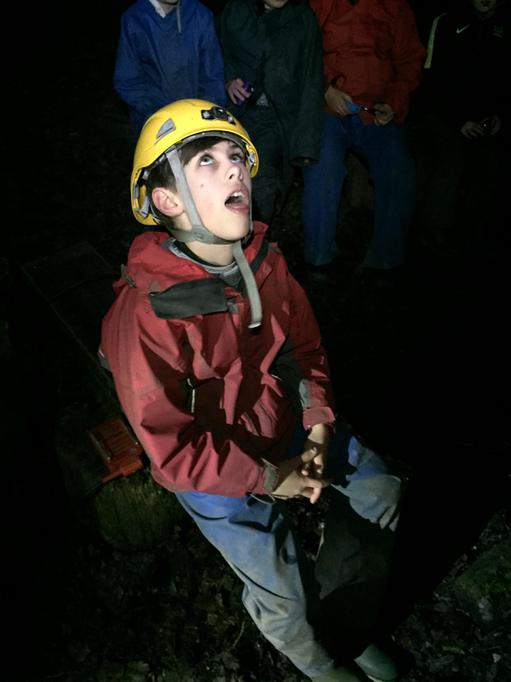 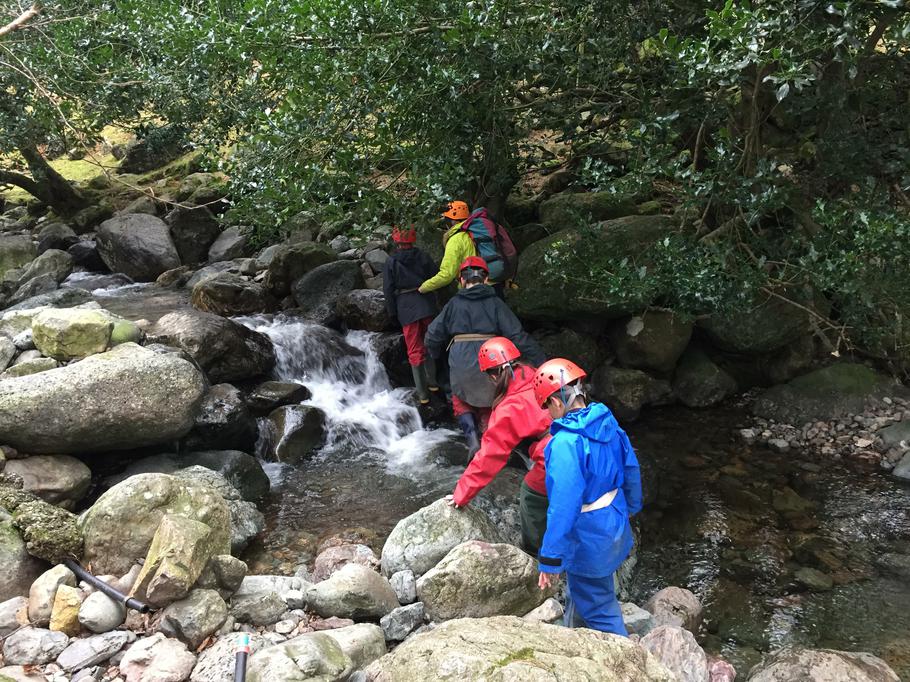 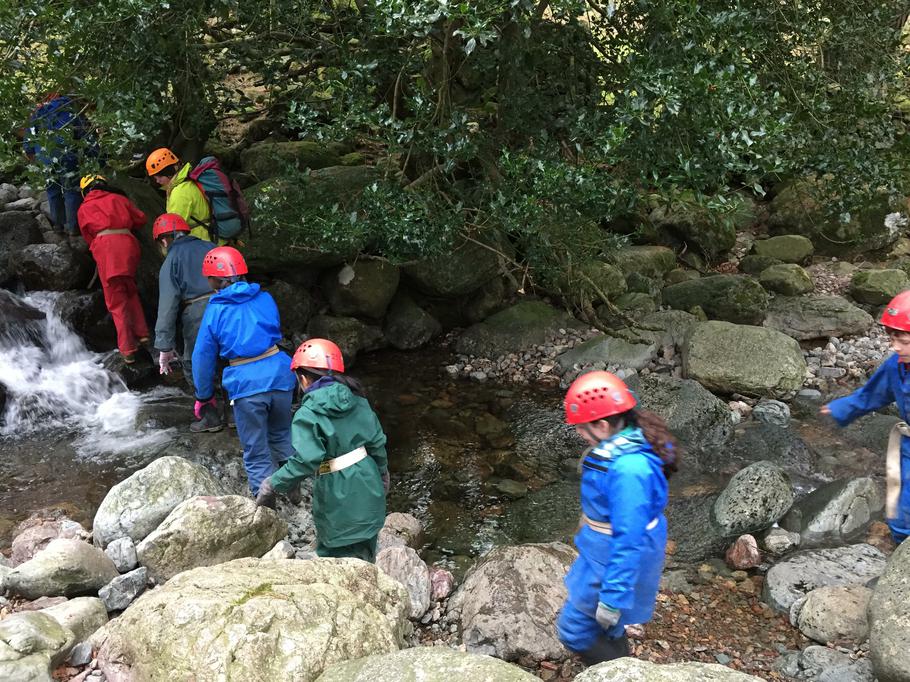 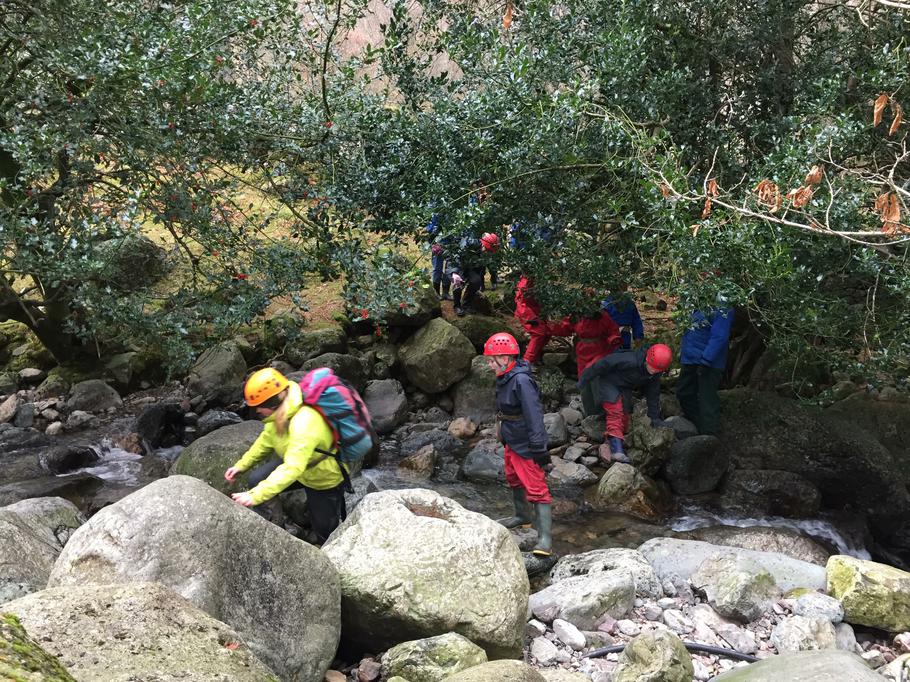 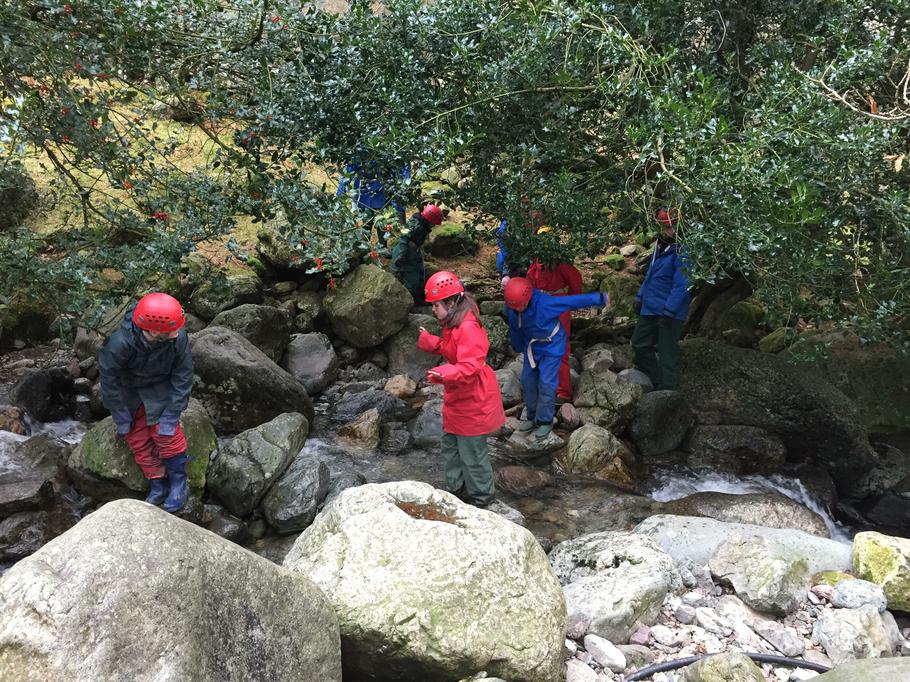 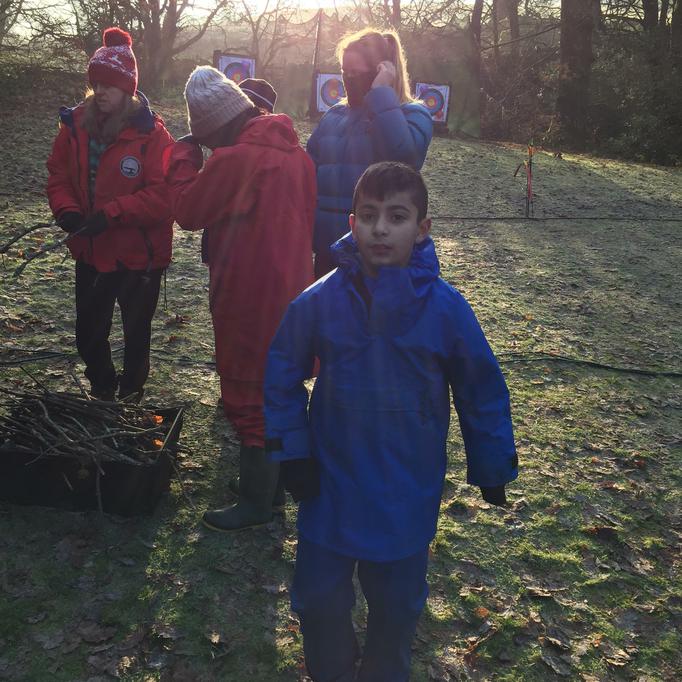 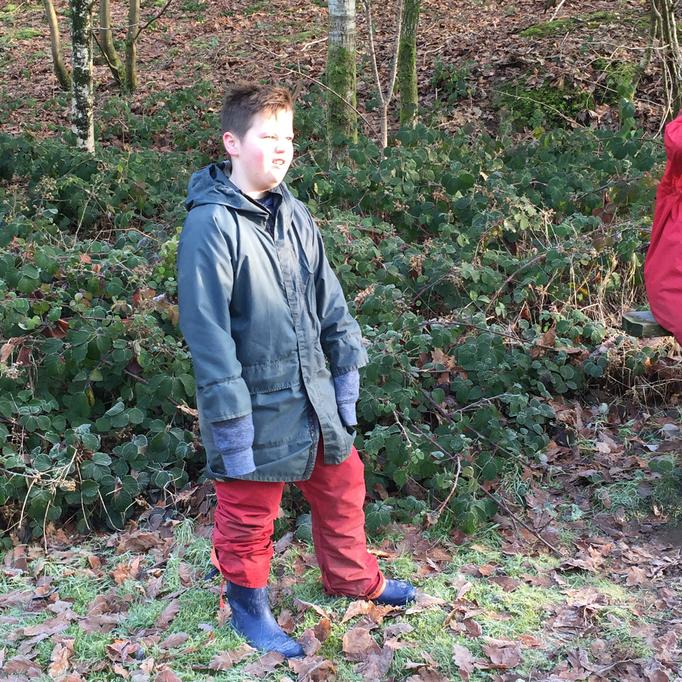 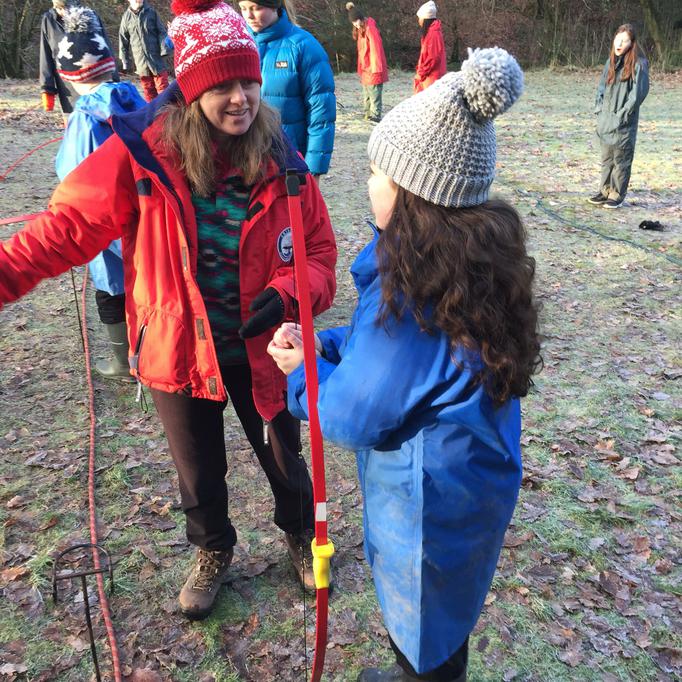 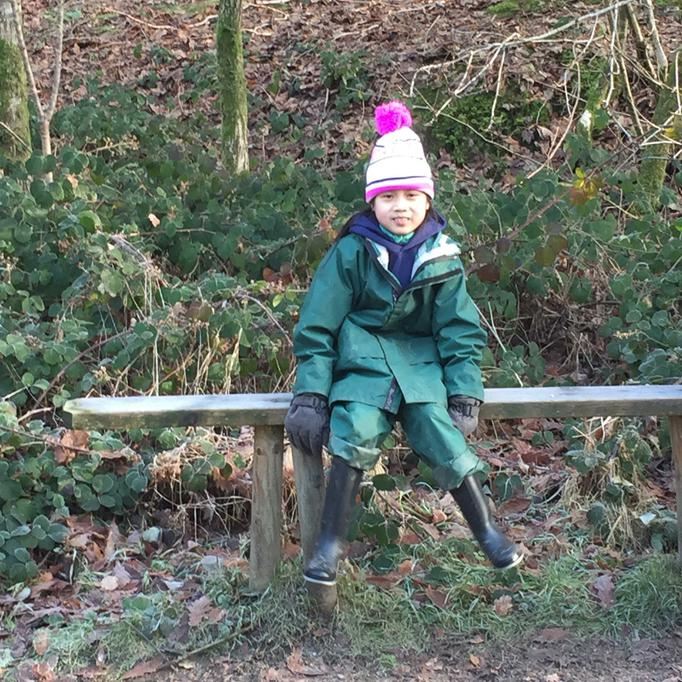 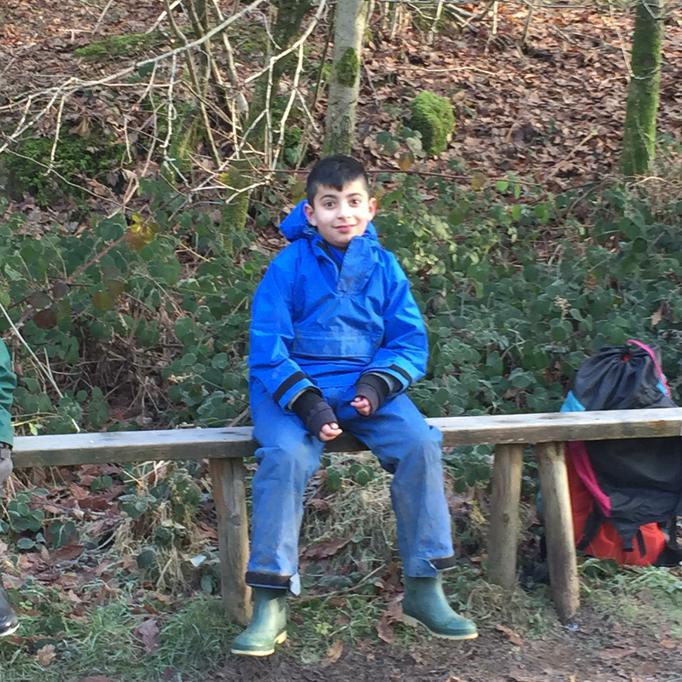